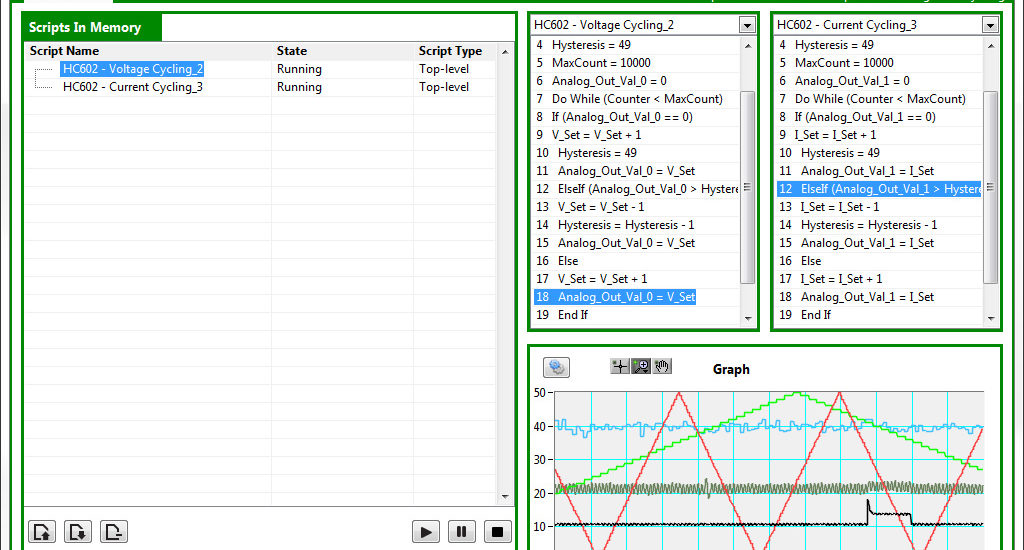 The typical software architecture delivered by Synovus with most automated test systems includes the following components:

The general rule of thumb is that code that changes little during development and over the lifetime of the test stands should live as LabVIEW code. On the other hand, procedures, making decisions and computing equations affecting how the system behaves rather than what it can do are better implemented as scripts.

The scripts are much more flexible for customization when the system is already setup. Engineers can make adjustments to parameters, add or remove steps and tune delays and pass/fail criteria quickly when changes are required. It is easy to protect those files from regular users modifying them by mistakes.

Why not do everything as scripts?

Speeding the script execution up

The script engine inside Symplify interprets every line at runtime before executing that line. Because of this, it is significantly slower than native LabVIEW that is compiled into machine code. On a modern computer, one should expect that it takes less than 5ms to execute 1 line of the script (~200 lines per second.) By default, unless told otherwise Symplify script engine in version 2.x and 3.x go at 1 line per second. To modify this, simply add the following line at the beginning of your script:

This would tell the script engine to perform 20 lines per second (every 50ms). You could also do:

Synovus doesn’t recommend going faster even though you could technically set this variable to 1ms. The problem here is a possible impact on the CPU load. Users should therefore stay at 5ms or slower.

Finally, if you have a need to run scripts rather than LabVIEW code … Symplify high-performance. The performance is roughly 100x better than our regular script engine. The drawback is that fewer operations are available and only numerical and boolean Tags can be used. String tags cannot be read from or written to within this version of the script engine and many functions have some limitations. You can ask for more details from our experts by using the Contact US form.

This website uses cookies to improve your experience while you navigate through the website. Out of these cookies, the cookies that are categorized as necessary are stored on your browser as they are essential for the working of basic functionalities of the website. We also use third-party cookies that help us analyze and understand how you use this website. These cookies will be stored in your browser only with your consent. You also have the option to opt-out of these cookies. But opting out of some of these cookies may have an effect on your browsing experience.
Necessary Always Enabled
Necessary cookies are absolutely essential for the website to function properly. This category only includes cookies that ensures basic functionalities and security features of the website. These cookies do not store any personal information.
Non-necessary
Any cookies that may not be particularly necessary for the website to function and is used specifically to collect user personal data via analytics, ads, other embedded contents are termed as non-necessary cookies. It is mandatory to procure user consent prior to running these cookies on your website.
SAVE & ACCEPT

Fill the form below to access all our resources. We won't ask you again later.