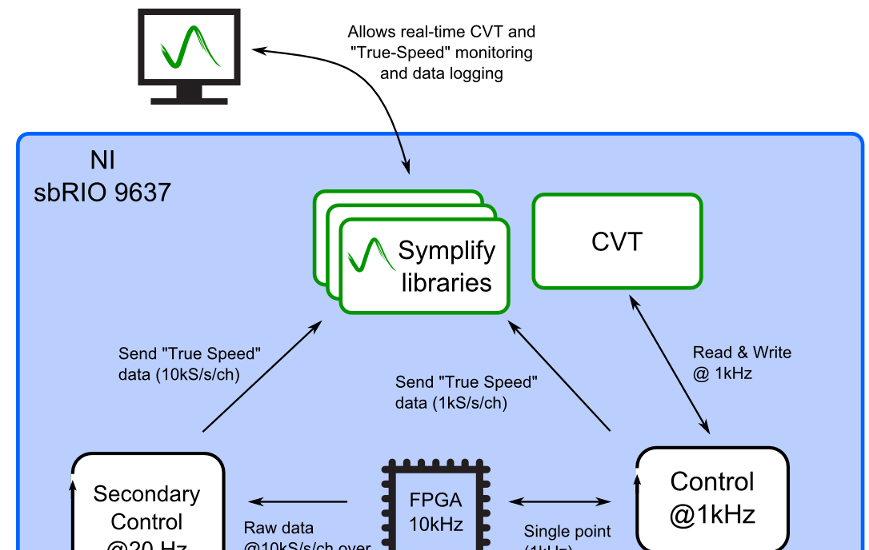 The NI CompactRIO is a compact, rugged and highly deterministic platform to run a large any control or headless datalogging application. Described as Programmable Automation Controller (“PAC”), they offer similar reliability as PLC but more flexibility.

This flexibility comes from 4 key aspects: 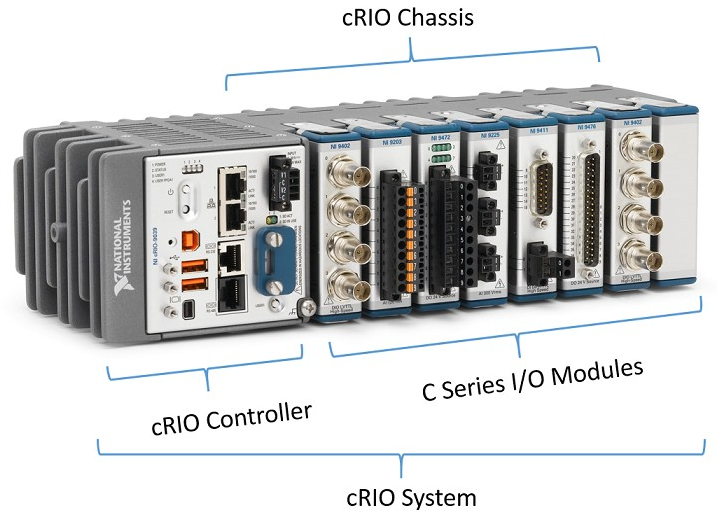 Symplify is written entirely in LabVIEW and Synovus completed all the development and validation to make its function run natively on the CompactRIO. From small changes in folder structure to decoupling every UI from the actual function (datalogging, System Log, Scripts and automation, etc.) our platform can be used in that deterministic target.

At the heart of our systems is the fast and lightweight communication between each function and its user interface. When a Symplify application is deployed on a CompactRIO, another Symplify application running on a PC can connect to it and monitor, in real-time and without impact on performance, any Tag or performance of each code section.

The user interface on the computer can also be used to configure the data logging, start a script or view thousands of points per second in real-time. The image below shows 2 section of codes inside a 1ms timed loop reporting on their execution time.

When no computer is connected to the CompactRIO, it can still perform all of its functions and store results locally or on a network location. At any time, it is possible to connect and view real-time as well as historical information while the application is running. This is very useful to troubleshoot in 60s, 24/7.

Symplify doesn’t include any special FPGA functions. Those are usually application specific and most applications can rely on NI DAQmx drivers rather than custom FPGA logic. Symplify can expose on graphs any result of calculation from the FPGA, even at 1MS/s when those are transferred to the CPU portion of the application.

See the interaction between a PC and a Real-time target in the video below.

You can read about how Synovus virtualized a complete tractor from Versatile to accelerate their firmware validation: Versatile case study

Read more about interesting applications with the CompactRIO directly on NI website.

This website uses cookies to improve your experience while you navigate through the website. Out of these cookies, the cookies that are categorized as necessary are stored on your browser as they are essential for the working of basic functionalities of the website. We also use third-party cookies that help us analyze and understand how you use this website. These cookies will be stored in your browser only with your consent. You also have the option to opt-out of these cookies. But opting out of some of these cookies may have an effect on your browsing experience.
Necessary Always Enabled
Necessary cookies are absolutely essential for the website to function properly. This category only includes cookies that ensures basic functionalities and security features of the website. These cookies do not store any personal information.
Non-necessary
Any cookies that may not be particularly necessary for the website to function and is used specifically to collect user personal data via analytics, ads, other embedded contents are termed as non-necessary cookies. It is mandatory to procure user consent prior to running these cookies on your website.
SAVE & ACCEPT

Fill the form below to access all our resources. We won't ask you again later.